Dying is Easy. Living is Hard.

Every day we are tasked with the option to Live or Die. It's tough to swallow, but usually we choose the red pill. We choose to Die. Because taking the green one, the one that gives us life, SEEMS boring. Or hard. It's easier to do little, to pull the trigger, to give up.

At the Emmy Awards the comedy team pictured below demonstrated the difference between comedy and drama. Drama had the woman holding on to the gentleman in an embrace. Comedy had the man dropping her. He simply gave up. Let go. He wanted to create a scene - and while doing so, the audience, his comedy team partner and others all sent him on the Death List. Although it appears the lady was dying, she only had a bruise. He had to recuperate from a dismal fall from grace and respect.

Days I hold back, those days when I don't want to get bruised, I do myself more harm than good. Staying quiet, choosing inactivity when what is most important is action or voicing something meaningful kills progress. Dying is easy. Living is hard.

Living takes decision-making. And then living up to it. Choosing activity and behavior that supports our decisions. Living requires effort. Survival, health, responsibility, relationships of support and finally self-actualization. Living requires being purposeful, focused.

Dying is easy. What's the cost? Is easy worth it? 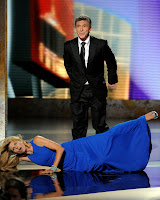